What is the Future for Refrigerants? 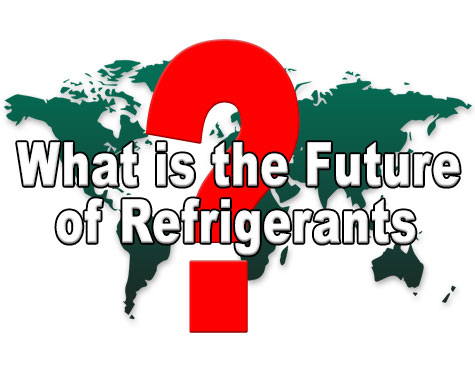 It is safe to say we are living in uncertain times, Covid-19 will no doubt, to some degree, change the way we live forever.

There is one thing that is certain though and that is change. Change is constant, change is inevitable and fundamental to our evolution.

Vapour compression refrigeration has now been around for over 200 years and while the principal design has barely changed, the chemicals used inside have evolved along with technology but not without limitations.

The first practical non-flammable, non-toxic fluids were introduced in the 1930’s – CFC’S (Chlorofluorocarbons) these CFC’s revolutionised commercial refrigeration but it wasn’t until the 1970’s that it was discovered that the Chlorine in CFC’s had a deleterious effect on the ozone layer so these were replaced with HCFC’s (Hydrochlorofluorocarbon’s)

Developed as an interim replacement for CFC’s these HCFC’s still contained chlorine just less of it and were used as the bridge to allow the adoption of the third-generation refrigerants HFC’s (Hydrofluorocarbons) introduced in the early 1990’s.

However, these new HFC’s did not come without their own problems, though now non-ozone depleting these new HFC’s were found to be greenhouse gases meaning that they contribute towards global warming when escaping into the atmosphere.

Now with heightened awareness to the effects of global warming all commercial refrigerant fluids are now rated by their GWP (Global Warming Potential) from low to high with R404A rated as high with a GWP of 3,922.

These HFO’s are unsaturated organic compounds composed of hydrogen, fluorine and carbon which unlike traditional CFC, HCFC & HFC compounds are saturated.

Almost perfect they do however have a downside, whilst these new compounds do offer a significantly lower GWP the trade-off is that as you reduce the GWP the flammability begins to increase.

This means that really low GWP HFO’s and HFO blends come with the Ashrae (The American Society of Heating, Refrigeration and Air-Conditioning) rating A2L – mildly flammable, despite having “American” in its name Ashrae are actually a global organisation that sets the standard for refrigerant quality, safety and specification.

Traditional CFC, HCFC, HFC’s have always been non-flammable (A1) so developing new flammable refrigerants may seem like a step backwards but it is important to understand the difference between flammable and mildly flammable.

To some extent all things can be considered flammable, even steel will burn if you get it hot enough.

Refrigerants are classified by Ashrae under these codes:

A2L refrigerants will burn, but their burning velocity is below 10cm/s, which is significantly lower than an A3 refrigerant such as R-290 which actually burns explosively when ignited.

The issue around these A2L refrigerants isn’t so much that they are mildly flammable but that in the UK the HSE (Health & Safety Executive) do not recognise the A2L classification so consider these refrigerants in the same class as propane, butane and other highly flammable gases so cannot be used in hotels, offices and many other installations that some other countries have deemed safe.

In the race to find environmentally friendly refrigerants it seems that all the low GWP options are limited and have trade-offs.

Ammonia is a good efficient refrigerant but is toxic, hydrocarbons are highly flammable, CO2 is low GWP, non-flammable and non-toxic but is very high pressure and has raised questions over its efficiency so is the answer A2L?

HFO refrigerants do tick most of the boxes and equipment manufacturers are now producing equipment designed specifically for A2L refrigerants that is safe and conforms to HSE and F-Gas legislative requirements.

So, 4th generation HFO refrigerants are here and being adopted, equipment technology is being adapted to allow for the safe use of A2L refrigerants and unless refrigerant developers discover a new wonder molecule that is efficient, non-toxic, low GWP, zero ozone depleting and completely non-flammable then HFO’s are here to stay.

The one thing that is certain, change is happening, we are moving towards a much more environmentally considered future and things will continue to change.